How to Write a Novel With a First Grader 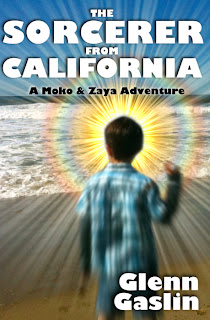 My new book is out, it’s called The Sorcerer From California, and it’s not an exaggeration to say that I cowrote it with my 6 year old son. (It’s no Axe Cop, but what is?) He came up with most of the best stuff, including the names of the heroes and villains, and it would never have happened without him.

I’ve written books before, and worked with dozens of coauthors over the years, but this was different. Strangely rewarding, and freeing, and lasting.

So, here’s a few tips on how to write a book with a first-grader, most of which would apply if you don’t spend your days with a 6-year-old:

I’m constantly spinning tall tales with my son Zev. In the car, before bed, during dinner, while shopping at Trader Joe’s, pretty much any time and everywhere. Sometimes, it’s “talk play,” where he’s, say, a student at the new superhero academy and I’m playing all of the teachers and his buddies. Sometimes it’s a straight-forward narrative that begins at some kind of rabbit hole and goes until I’m exhausted. Sometimes, it’s a bedtime story about some strange moon, where everybody’s asleep by the end.

Most of the time, he’s collaborating, or hijacking, the story. It’s his favorite thing in the world, and I believe he would stay up for a week straight if the story was good enough.

2. IMPROVISE AND ROLL WITH IT

Last year, Zev and I attended the L.A. Times Book Fair. He left with the idea that we should write some kind of frightening fantasy adventure story, and make it a book, and bring it to the Fair. So we cooked up a wafer-thin concept, committed to it and forged forward.

The idea was that a kid found a magical object (it became a beach bracelet) that sent him, through his dreams, into a dangerous and magical place.

I went with it. Had I sweated the concept a little more, I might have constructed a more elaborate or logically sound portal to the fantastical world, but whatever. This worked as well as a wardrobe or magic tree house. So I began telling him about a boy who went to sleep with a new woven beach bracelet on, and how he woke up on a lost island surrounded by frightened little flying ladies. This quickly turned into the hero being kidnapping by flying wolves, dispatched from a dark fortress. So our adventure began.

My son came up with a lot of what’s in the book, including the main character names (Moko, Zaya, Mafibious, Yama). I would pause when introducing somebody new, and ask him what he or she might be called.

Zev has an aptitude for this, and named the hero Moko, and his friend Zaya (“It’s Japanese for flower,” he said, which I’m pretty sure it’s not.).

He named the main villain, eventually, though at first we were calling her The Dark Other Mother Emperor Queen of Fables. As we got to know her better, he came up with Mafibious.

The names gave him so much ownership in these characters, and then everything that happened to them. During this time, I also asked him what he’d like to name his new baby brother. His suggestion was Dragonhead McGee.

So, of course, not every name is a keeper.

I told these stories every day in the car, usually headed to school or sports, and I knew I had a fairly short window. So I always tried to build to a cliffhanger, ending each “chapter” with Moko either in deep trouble, or with a new revelation changing the course of things.

Zaya won’t wake up! Moko’s surrounded with no way out! A new beast appears, is it friend or foe? We’ll find out tomorrow!

Of course, this both infuriated and excited him (“Nooo! You can’t stop there!”), so I kept at it.

Once I realized this story was taking on a bit of an epic arc, I started to take notes. Every day I would put down everything I could remember from the latest installment, adding notes and details, trying to improve what may have been some random or not entirely wise plot developments. (I couldn’t change too much, though; Zev takes the original telling as canon.)

Sometimes, I would make notes on the direction, and future installments, but I rarely wrote ahead. Eventually, I would see the climax of a certain story and start building toward it.

Soon I had an outline, and started turning it into prose and chapters. (The outline, as it stands, covers at least seven books worth of material.) Having originally spun the story in bite-sized chunks with cliffhangers, this defined most of the chapters. But like any story, it needed structural help, and writing, and rewriting.

Writing to the second-grade reading level was a challenge, and I’m sure I have a ways to go before I really have it down. Definitely a departure from the style of my previous novel, or most of the fiction I write.

But having written thousands of articles for newspapers, magazines and blogs, honestly, it’s not that different. Some things are universal. Keep to the basics of clear writing, short sentences and no ten-cent words, with an ear tuned to variety and rhythm. And then...

I say this to anybody writing a book: Every first draft sucks. Let it suck. You have permission to write a messy, overlong, typo-riddled first draft. That’s what it’s there for. To suck, but more importantly, to exist. Otherwise, there’s no way to get to the second and third and final drafts. It’s the only way in.

This isn’t news to most writers, but it’s great to be reminded.

This is where the most mysterious things in writing happen, where you draw microscopic connections between themes and characters, where the mundane becomes lyrical, where two ponderous chapters become three thrilling ones, where a simple turn of phrase can give meaning and power to the previous 50 pages.

I cannot comment on these things, or offer any tips, involving first-graders or otherwise. These things are between you and the words.

I’ve never been so nervous to read anything, anywhere, than when I read Zev the first draft of The Sorcerer From California. He was nervous, too, and thrilled. I took notes, I made revisions and corrections (“Wait, Moko doesn’t even get his staff until he meets the Lava King.”)

Revise and revise some more, after this reading, and you can consider yourself done.

For Hanukkah this year, I gave Zev a paperback copy of the book he cowrote, with his picture on the cover (from the back, obscured in light, but it’s him). Now, this isn’t an article on how to find a publisher or an agent, so I won’t get into all of that. I’ve had agents, and big publishers and small publishers, but not for this book. For this book, I published independently, through Amazon. Which, in the 21st century, can be fast and professional and entirely satisfying, and that’s a topic for another time.

The gift I got this year was seeing Zev unwrap the book, and realize what it was, and read the dedication, and run as fast as he could to throw his arms around me.

Finishing a book can be satisfying, yes, but can be followed by a strong emotional lull. Post-show blues, is what actors call it. But instead of getting stuck there, use the momentum of finishing and publishing. Move on to the next thing. All writers have a next thing, and then another thing after that, it’s just a matter of catching it and wrestling the thing onto some pages before it escapes.

After years of not putting down any new pages, of letting the next things pass me by, I’m writing every day again. I’m now halfway into another new novel, with so many ideas lined up that I need a staff, or a lifetime, to get through them all.

Or better yet, a first-grader.

CHECK OUT THE SORCERER FROM CALIFORNIA!
Posted by Unknown at 9:58 PM