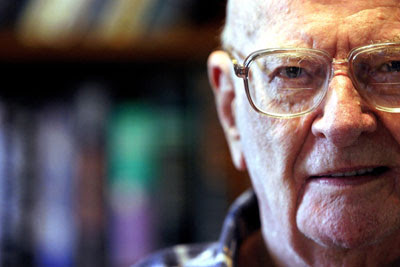 Not even sure where to go with this sad news. Most people might assume he was already gone, that the man who saw so well into the 21st century and beyond couldn't possibly pass here, among us, in a time when we've yet to colonize Europa and Mercury, shield our planet from wayward asteroids or build that damn space elevator from the Earth into orbit.

I'm proud to have at least interviewed the man, last century and via email, upon the release of 3001: THE FINAL ODYSSEY (possibly my least favorite of his books). He had me laughing out loud with his answers to my attempts at smart/smart-ass questions, but where that interview is now, I have no idea.

No way I can do justice to Clarke's impact and won't try here. Be silly of me. I'll only mention that RENDEZVOUS WITH RAMA remains one of my Top-Ten-Ever books, a so-totally-simple yet supremely grand work of science fiction and imagination, the sort of thing that honestly and truly sends a young mind into the heavens, to return forever changed. Read it, people of The Future. Maybe you'll learn a little something.
Posted by Unknown at 3:48 PM