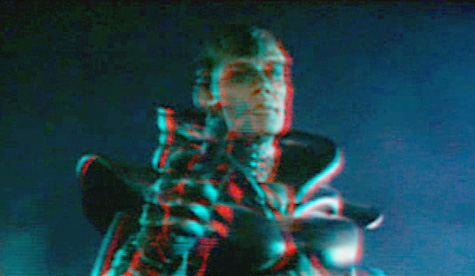 I'm baffled. Today they announce hip-hop dance sequel STEP UP 3-D, which will be, oh great, presented in all three available dimensions.

Nobody really wants 3-D movies. I don't want 3-D movies, do you want 3-D movies? I didn't think so. And I can say with absolutely certainty that, if I stood on the corner with a clipboard and asked strangers, "Hey Moviegoer, what more do you want from your moviegoing experience?" that not a single one of them would ask for more movies in 3-D.

I saw one 3-D flick last year, BEOWULF, and I do have to admit that shit was fly, but mostly because of the Beowulf vs. Sea Serpent melee (best fight scene of '07, easy) and the giant IMAX screen. Not because of the two times Angelina Jolie's hair/whip/tail floated around in the movie theater.

Anyway, I'd round up the upcoming 3-D movies by big-shots like James Cameron, and then go on and on about '80s 3-D classics such as METALSTORM and SPACEHUNTER, but gee it seems we're out of time!

Speak for yourself college boy. I'm anxiously awaiting dancers spinning on their heads right on top of my own head.
And you forgot to mention the most important 3D movie of all time - Captain EO!!! Google it, 24 year olds.